The Next Stage Extra Booster Box 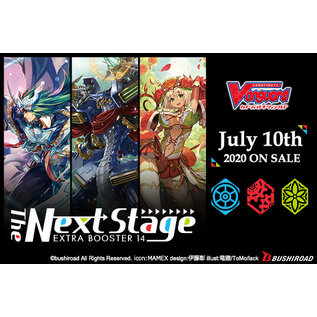 Extra Booster "The Next Stage" introduces cards that can strengthen the 3 Trial Decks that go on sale June 26th 2020!

Featuring the evolved forms of cards such as "Chronodragon Nextage" for "Chronojet Dragon", and "Aerial Divine Knight, Altmile" and "Dream-spinning Ranunculus, Ahsha" for "Altmile" and "Ahsha"! Also, cards that support "Blaster" themed decks are included as well!

Featuring a new card type known as "Order"! The player going second gets a "Quick Shield" when he or she rides on the First Vanguard, also featured in this product!