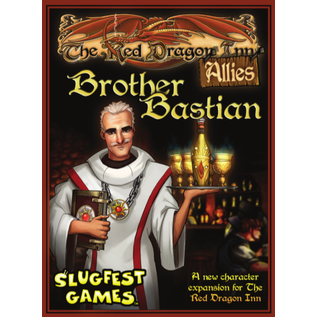 Brother Bastian was a member of a severe sect devoted to Korash, the god of justice and light. When he learned of an orc masquerading as a paladin of his god, he was furious. But upon meeting her, he realized that this orc was no imposter and that there was more to Korash than he had been taught.

The Good: Brother Bastian knows many powerful prayers and knows exactly when to use each one.

The Bad: Unfortunately, because he knows so many prayers, you never know what he’s planning next.

The Red Dragon Inn: Allies – Brother Bastian expands the party at the Red Dragon Inn with a brand new character! Bastian brings powerful prayer cards with him, giving him more flexibility and secrets than you’d expect from a humble servant of Korash. Making sacrifices throughout the game so you can use your prayers at the perfect moment will lead you to victory!